EYES WIDE OPEN: Marlen Khutsiev's film IT HAPPENED IN MAY (1970)

Old films are like a message in a bottle, mysterious and enchanting, even more so if written in an hidden code to elude the censor. Sophisticated and committed to self-expression, Soviet film makers from Eisenstein to Muratova have made such coding part of their cinematic aesthetic, and as Soviet experience fades into distant past, lovers of vintage cinema would do well to keep this in mind. Marlen Khutsiev belongs to the Olympian roster of Soviet directors auteurs whose films transcend ideological regimentation. Few have more successfully incorporated this constraint, making it part of their cinematic expression.

Marlen Khutsiev(his given name is a contraction of MARxLENin) was born in 1925 in Tbilisi, Georgia, to a father who was a committed Bolshevik revolutionary and shot, like many, in the Stalinist purges in 1937. This year Khutsiev plans to release his thirteenth film featuring a dialogue between – appropriately for a nonagenarian director – two Russian sages, Anton Chekhov and Leo Tolstoy. Khutsiev is, perhaps, best known for his 1961 I am Twenty (a.k.a. Zastava Ilyicha) and July Rain (1966) – films that share the cinematic “vibe” with Michelangelo Antonioni’s L’Avventura (1960) and Blowup (1966). Like Antonioni’s, Khutsiev’s films became iconic for the 1960s generation.

It Happened in May (Был месяц май, 1970), too, is intensely contemporary. Released to mark the twenty-fifth anniversary of the end of WWII, it falls thematically within the range of government-sponsored topics: victory over the Nazi evil, war-time heroic sacrifices, and staying vigilant in the face of the uneasy coexistence with the former foe. In the USSR, by 1969, the victory in WWII has largely replaced the revolution of 1917 as the principal source of legitimacy for the Party and the state. Accordingly, movie houses, TV screens, theaters, bookstores, and media were saturated with war themes.

There was also a pernicious side to this enforced obsession: the Brezhnev regime used the theme as a cover for rehabilitating the war-time supremo Joseph Stalin and his party’s Gulag record. Like many among the intelligentsia, Khutsiev was appalled. Although not a dissident, he joined other prominent artists and scientists in 1966 who petitioned against creeping Stalinism. No wonder, then, that he approached the war theme from an unusual angle and introduced his own, subtly discordant, note into the official chorus of commemorative hosannas.

A war movie, It Happened in May is set paradoxically on a bucolic German pig farm, untouched by war, a few days after the Nazi surrender. But before the story begins, as if to get the requisite bravura out of the way, Khutsiev opens with a five-minute montage of war footage, replete with a deafening battle-field soundtrack overlaid with Tchaikovsky’s Manfred and culminating in the hoisting of the Red flag over the Reichstag. Then, all of a sudden, come the deafening silence and the indolent air of the opening scene: the protagonist, a young Lieutenant (Alexander Arzhilovsky) wakes up on a peaceful sunny morning in a clean and puffy farmer’s bed. There were more surprises to come.

Made for television, which explains its generous use of close-ups and a spare setting, the film is based on a short story by a war veteran writer, Georgy Baklanov (Fridman), entitled  “The Wages of Horror” (Почём фунт лиха,"1962). Baklanov (1923-2009) was a well-known chronicler of WWII much admired for his authenticity and honesty. In his story, an old veteran recalls how, as a young officer, he was stunned when coming face to face with the Nazi camps and ovens, concealed by the civilized surface of German life. On the face of it, the film, like the story, was meant as a message in a bottle from the WWII generation to be discovered by their carefree descendants a quarter of a century later. But while Baklanov’s narrative is straightforward, the film infuses the central moment of discovery with extraordinary resonance and depth. 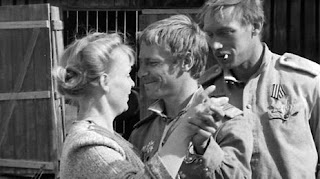 A small detachment of Red Army scouts, led by a twenty-one-year-old lieutenant, is quartered on an idyllic German farmstead that appears untouched by the war. The soldiers are making friends with the farm’s German owners who are as eager as the Russians to put the war behind them. The camera focuses on the simple pleasures of peace: sleeping late, a hearty meal, sharing a carafe of cider, the soldiers making simple conversation in broken German, their clumsy courtship of the farmer’s pretty wife. The farm raises pigs, and the soldiers are eager to help the young-looking farmer’s wife in her chores around the well-tended pigsty. But come evening, the farmer, mindful of the soldiers’ gallantry, takes his wife and their teenage son to spend the night with relatives in a nearby village. The overall scene’s setting is serene but the inquisitive camera eye, awkward silences, strained exchanges, and the  scene’s flat, shadowless light lend the opening episode the air of the uncanny – a Gothic fairytale castle, its ghosts too shy for the light of day. 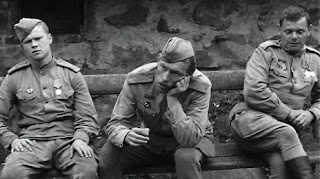 Early in the evening the young Lieutenant is summoned by his superior to a nearby estate where a group of junior officers are celebrating the end of the long war. The Lieutenant mounts a trophy motor bike and speeds to the party along a beautiful wooded alley. Within sight of his destination, an opulent German country house, he fumbles and crashes. For a moment he looks dead. This is how Khutsiev prepares him for a nocturnal encounter with the ghosts – readies him for the descent into hell. 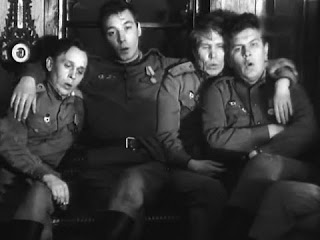 The accident leaves the Lieutenant dazed but uninjured and he soon joins the partying officers, raising melancholy toasts in honor of fallen comrades and singing melancholy Russian songs. They have seen too much grief and lost too many comrades to enjoy their victory celebration. As the party comes to an end, the host, a Sr. Lieutenant (played by the film maker Peter Todorovsky wearing his own war-time uniform), invites officers to go for a ride in a captured German
convertible. Unexpectedly, they are stopped at a mysterious gate, not quite realizing they have arrived at the gates of hell, a Nazi concentration camp. Inside, still clueless, they enter the dark buildings. Illuminated by their flash lights, various objects come into view: mysterious empty cans (the gas Zyklon-B), mounds of abandoned footwear, spoons, and finally, heavy oven doors that the visitors take for the camp’s heating system. 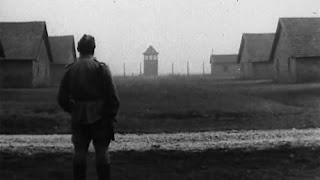 Only later, when the Lieutenant encounters the camp’s former inmates, who wander onto the pig farm in the night, does he learn the truth about the death camp: the gas ovens, the burning of the victims, the use of human ashes to fertilize the nearby fields. When he finds out that their hosts had been complicit in having one of their Polish forced laborers gassed, the officers go searching for them in the nearby village. In vain. The family has disappeared. The farmstead is also empty, except for the pigs. The final shot is of the Lieutenant.
He is standing alone, dazed and bewildered by the revelation, while around him the farm’s well-tended pigs are crowding the yard, a fairytale visual substitute for the disappeared family. 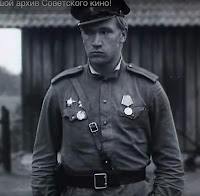 The film’s final segment, like the introductory part, consists of a montage of documentary footage, but this time, the clips show street life of modern European cities – Berlin, London, Paris, Moscow – replete with well-dressed men, women and children hurrying on their way along avenues pulsating with traffic. Wearied by the horror, the eye feasts on these quotidian scenes. Without warning, the human traffic begins to flow onto the grounds of a concentration camp museum.

Now the moving images get interspersed with some of the most famous stills of the Holocaust. The knowing viewer is perplexed. The stills show what look like exclusively Jewish victims whereas those in the film are a Polish couple forced to work on the pig farm.
The camera lingers, moves on, and then returns to one of the iconic holocaust images – a seven-year-old Jewish boy from  the Warsaw ghetto, his arms raised in a gesture of surrender. The present-day footage resumes, and the camera picks out a charming boy of the same age and follows his gaze before fading into the credits. This final juxtaposition – a Jewish boy victim and his happy and free counterpart of 1970 – invites the Soviet viewer, keenly aware of subliminal messaging, to recapitulate the film narrative mentally, thereby deciphering its other layer of meaning. Apparently the film functioned also as a silent protest against official Soviet anti-Semitism. Soviet propaganda habitually suppressed the story of the Jewish holocaust and denied the Jews’ singular status as victims of the Nazi extermination policies. 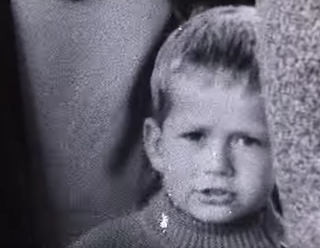 Baklanov must have been ecstatic for the way Khutsiev  “unpacked” the hidden, perhaps even unconscious, layers of his short story. In a rare tribute of one author to another, he renamed his "Wages of Horror" after the film.  In all subsequent publications the story appeared as “It Happened In May.”

Posted by Grisha Freidin at 12:20 PM No comments:

Posted by Grisha Freidin at 2:25 PM No comments: