Today came the sad news about Carl Weber! He died on Christmas Day in Los Altos at the age of 91. Cynthia Haven put up a notice on her Stanford blog with a reprint of her 2010 piece on Carl. What a big loss it is for all of his friends, students, and colleagues. A giant passed away, and with him, so much mastery, so much rich and unique history is gone forever. I came to know him in 2003. It never occurred to me he was eighty one: he had more verve and and a firmer grasp on art and life than many of my much younger colleagues. I would like to offer here a few words about our one-time friendship and collaboration that touched my own work and life.

We became close during the big Babel events that I organized and participated in in 2003-04 (a conference, and exhibition, and play production). Carl, who had started his theater career under the tutelage of Berthold Brecht in the Berliner Ensemble (he headed it after Brecht’s death in 1956), had his eye on Babel’s play Maria (1933) since the 1960s, when Babel's posthumous career took of in Russia and the West. The play is full of young people, and this, as he explained, made it perfect for a university casting. Until then, I had not put much stock in Maria; I preferring the earlier Sunset (1926), based on Babel’s famous Odessa Tales. Maria seemed to me then like an outlier in Babel’s oeuvre. It is set, not in his beloved mythical Odessa, but in the dark and cold Petrograd of 1919; its characters resemble more those in Uncle Vanya than Babel’s own colorful Jewish gangsters or Red Cossacks. But Carl convinced me that casting Sunset at Stanford would be a real problem, and I, a babe in the woods, agreed to undertake with him the production of Maria (1933). Another condition: he wanted me to be there with him all the way and serve as the dramaturge (I had to look up the word).

I was not a theater man and I had no idea what I was getting myself into. I do not mean the resources I had to marshal to have the play staged, including a big chunk of cash that Dean Keith Baker helped me raise for a revolving stage, “an absolute must” to do justice to the cinematic structure of Babel’s play in eight scenes. Carl did not want some modest affair. His idea was to mount a full-scale production, with an original set designed from scratch, real costumes, with music, visual projections, fancy curtain, in short, all the trimmings, as if we were on Broadway. But getting hold of the resources and taking care of the technicalities – these were a small part of my job compared to the kind of treatment that Carl, as director, subjected the play to, and me along with it.

Beginning early fall, we met two or three times a week for lunch or coffee to read the play together. Carl did not know Russian,  and as we read into the play, he queried literally every word (I realized then that the award-winning translation had a lot of howlers and had to redo whole sections of it). Carl intuition was fierce: I was often surprised to see myself circle back and discover a hidden pearl exactly where Carl suspected it to be but where I, the Babel scholar, had seen nothing. In effect, Carl forced me to take apart the whole play, disassemble it into its smallest particles, elaborate all the hidden subtexts, resonances, and implications, produce extensive cultural “dossiers” on all the characters, contextualize the action and background events, and finally, put it all back together as a play by author and man Isaac Babel. It was in the course of this dramatic directorial treatment that I came to see the play, not as an outlier, but as a brilliant work, central to the Babel’s oeuvre, and a work of great civic courage. The “ugly duckling” concealed an authorial cri de coeur, the play itself, a powerful autobiographical subtext. A precursor of Beckett’s Waiting for Godot (the eponymous Maria Mukovnin never appears on stage), the play was a deeply personal testament meant for Babel's future audience. My collabortion with Carl was a lark but it enriched and deepened my understanding of Isaac Babel, and with it, the conundrum of Russian-Jewish authorship in the twentieth century.


The play was a success and ran to full house at the Pigott Theater for four performances. In attendance was Babel’s older daughter Nathalie Babel, his second wife Antonina Nikolaevna Pirozhkova and her, and Babel’s, younger daughter Lydia.

After the final curtain, we asked Pirozhkova, who sat riveted throught the performance, if she liked the play. She replied, holding back tears: “I know this is how Babel would have liked to see it done.” Precious words from one who spent her lifetime safeguarding Babel’s legacy, for many years at the risk to her own life. Fortunately, I was able to video-record the dress rehearsal of the play. I later turned into a DVD, and can now be seen in full on YouTube (it plays well on my Mac using Google Chrome).

Afterwards Carl and I kept seeing each other, we fantasized about some other future production. But none of this came to pass. He and his wife came to have dinner at our house in Berkeley. Alas, soon after, his wife took ill and died. Widowed, Carl spent long periods of time in France where he had a house in the country. Our dates in Paris never worked. We still met for lunch or coffee occasionally when he was on campus but contact attenuated. My own circumstances made socializing at Stanford increasingly difficult, driving to Berkeley was a problem for him. Eventually, we lost touch. 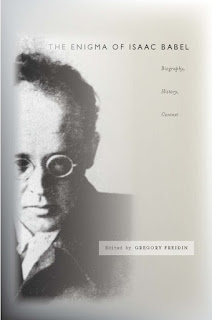 Fortunately, Carl left a record of our Maria  adventure. He contributed an essay on staging Maria at Stanford for the a volume of essays on Babel that I edited, based on the Stanford conference and the Exhibition we mounted at the Hoover concurrently with the play (The Enigma of Isaac Babel, Stanford UP, 2009). It was called “Staging Babel’s Maria – for Young American Audiences, Seventy Years After.” Like his contribution, my own long essay, “Two Babel’s – Two Aphrodites: Autobiography in Maria and Babel’s Petersburg Myth,” is the fruit of this blessed collaboration. If it ever get republished, I will dedicate it to Carl.