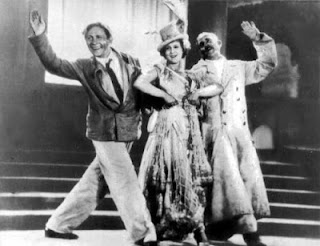 Out of the blue came the publication of my little piece on jazz in the USSR in the 1920s and 1930s, a response to a passage in a review by Michael Scammell in the New York Review of Books. I've had the link to the issue of NYRB, but it is no longer operative, so, just in case, I am appending the text below the link.

The Russian Nobility Under the Red Terror from the March 7, 2013 issue

I very much admired Michael Scammell’s masterful and exhaustively researched biographies, and I read with great interest his nuanced review of Douglas Smith’s Former People: The Last Days of The Russian Aristocracy [NYR, March 7]. All the more surprising, then, is the impression of chronological confusion conveyed in the passage dealing with the fashion for fox-trot, brought to Russia by Americans working for the American Relief Administration in 1921–1923. Scammell writes:


The fox-trot was an immediate hit in Moscow—but not with the authorities or, surprisingly, with some pillars of the literary establishment.

The bard of the Soviet proletariat, Maxim Gorky, maintained that the fox-trot encouraged moral degeneracy and led inevitably to homosexuality. Anatoly Lunacharsky, commissar of enlightenment, wanted to ban the foxtrot—and all syncopated music—from the country altogether (and he succeeded some months later).

The impression, then, is that Gorky, who invited the ARA to come to Russia in the first place but from 1921 lived abroad until his return in 1928, spoke out against fox-trot in 1923–1924 or that around the same time Anatoly Lunacharsky “succeeded in banning all syncopated music.” Nothing could be further from the truth. Gorky’s notorious outburst against the decadence of contemporary Western dance music postdates the ARA’s tenure in Russia by five years (“On the Fat People’s Music,” Pravda, April 4, 1928). Nor did Commissar of Enlightenment Lunacharsky, whose disparaging remarks about fox-trot appeared in his tribute to the Malyi Theater in a 1924 volume marking its centenary, try to ban or indeed could ban “all syncopated music a few months later.” Jazz music and fox-trot thrived in 1920s Russia well into the 1930s.

The proof is on YouTube: all one needs is to listen to the old recordings of Leonid Utesov, whose jazz (with a strong whiff of the Odessa klezmer) was all the rage in the 1920s and 1930s. Utesov starred in the jazz comedy film Merry Fellows that took the USSR by storm in 1934 and remained an all-time favorite for decades. Also iconic for the USSR in the late 1920s and early 1930s was Vincent Youmans’s fox-trot “Hallelujah,” performed on Soviet Radio in 1928 by AMA Jazz, the band of the famous Soviet jazz pianist and composer Alexander Tzfasman.

Not that the cultural commissars did not periodically inveigh against jazz and pop culture; they did (and not just in Russia), but the strictures did not become effective until late Stalinism (1946–1953), when the USSR turned xenophobic and ultra-nationalist. A reliable and readily available source for jazz history in Soviet Russia is Frederick Starr’s Red and Hot: The Fate of Jazz in the Soviet Union (Oxford University Press, 1983).

Posted by Grisha Freidin at 5:09 AM 4 comments:

A Critic, His Life, His Age: A Tribute to Joseph Frank


Great musicians, it is said, do not choose their calling—music chooses them. Reading and rereading Joseph Frank’s writings, it seems the spirit of modernity itself chose him to be its voice—a great choice for the age when brute force remaking the world was matched and animated by a titanic struggle of ideas.
How else to explain, then, that Frank’s debut in Scholastic,[1] bore a title more fitting for the epilogue of a career: “Prolegomena to All Future Literary Criticism?” The year was 1935. Frank was seventeen and an orphan. A mere decade later, while he worked as a reporter, came entry into the big leagues: The Idea of Spatial Form.[2] His last book, Responses to Modernity, with a telling subtitle Essays in the Politics of Culture,[3] was published just a few months before illness claimed him. In-between, there are almost three hundred essays and reviews, some in French, and a monumental biography of a Russian writer whose fictional characters come alive even as they reenact the metaphysical mystery play of the modern era.

Frank’s stutter, which he struggled with all his life (but I remember with fondness), looks in retrospect like a mark of election. The affliction came along with an extraordinary aesthetic talent and a gift for empathy. The stutter forced him to develop, while still in his teens, a powerful voice as a writer of critical prose. Authoritative and subtle, uncompromis­ing yet forgiving, it was so deeply resonant and expressive that had Hollywood come calling, only an Orson Welles with the strut of John Wayne could have filled the bill. Its force is already present in his  “Dedication to Thomas Mann,” published in the NYU student journal in 1937[4]; it is undiminished in “Thinkers and Liars,” one of his last pieces in The New Republic,[5] and it reverberates throughout the entirety of his Dostoevsky  Pentateuch, the first five books of every Slavicist Bible.

His writer’s voice was Aaron to his Moses, except that it was inflected with an extraordinary aesthetic intelligence—and a sense of empathy, too. For Frank, the world picture—like a poem for T.S. Eliot, as Frank noted wryly—had to “preserve some ‘impurity’ if it was to be humanly meaningful.”[6]

As a critic, he entered the fray in the mid-1930s, when the world was rent by a clash among the all-too-imperfect democracies and the perfection-mongering regimes of Communism and Fascism. Like many in his generation, he appreciated Marx and identified with the Popular Front, but up to a point.

Then, early in 1939, unhappy though he was with existing order, Frank broke with New Masses, his Red book-review outlet.[7] He had found prescriptive Marxism dead, its historical calculus—the ends justifying the means—odious, and its sacrifice of the arts on the altar of political expediency, unacceptable. Russia, the birthplace of Dostoevsky and Lenin, now ruled by Stalin, was Exhibit One on both counts, as was, of course, Nazi Germany. Apparently, New York refused to listen but Robert Penn Warren and Allen Tate, two Southern Agrarians, lent him a sympathetic ear.[8] As did a few intellect­uals, exiles from Nazi Germany, whom he befriended during his war-time journalistic stint in Washington DC and with whom he continued his informal studies of great continental writers and thinkers.

By the time The Idea of Spatial Form appeared in Sewanee Review in 1945,[9] Frank’s critical stance had been fully formed: it combined the intellectual tradition of Western liberalism, including a search for social justice and thus elements of Marx, with a commitment to abiding ethical and aesthetic values, rooted in Western individualism, the Judeo-Christian tradition, and, significant for Frank, modern literature and art.

What holds these disparate, sometimes tragically incompatible, elements together is Frank’s unstinting belief in the power of art and ideas, as well as his humanity, his appreciation for human suffering, frailty, and contingency—what in Dostoevsky is called “pity for man.” Lack of it was unforgivable. “It is unseemly,” Frank chided an historian and a biographer, “even for a social psychologist to kick a man when he is down.”[10]

Frank’s Dostoevsky was thus preordained, even over­determined, given his early admiration for Camus,[11] and not just as a scholarly study of something or other, but as a critical biography. A genre as capacious as the novel, biography is capable of embracing historical context, ideas, psychology, along with all manner of human contingency. And just as for Dostoevsky, his novels recapitulated his own commitments and dramatized the ideological and metaphysical conflicts of his age, so for Frank, his biography of the great Russian was called forth by rank’s own life, his own commitments, and the historical struggles of his own age. For neither author, the turn to fiction and biography was accidental: only art is capable of giving these disparate elements a coherent and human form.

Reading Frank’s Dostoevsky is to hear the challenge and response of two giants, towering like sentinels, each over his own century.  No better tribute for a critic is possible.
This is how, then, to borrow a phrase from Frank’s Idea of Spatial Form, “the time world of history becomes transmuted into the timeless world of myth.” It is thus that a great man of letters becomes his admirers.

The mark that Joseph Frank left on the life of those who had the good fortune of knowing him. He is part of me, us—we will remember.
Paris. 17 May 2013
© 2013 by Gregory Freidin

This tribute was prepared for the Memorial to Joseph Frank held at Stanford University on 20 May 2013. I wish to thank my friend and colleague Professor Gabriella Safran for standing in and reading it for me.

For a report on the Joe Frank memorial at Stanford, see Remembering Dostoevsky scholar Joseph Frank: “He had no enemies” by Cynthia Haven on her blog at Stanford University: The Book Haven: Cynthia Haven's Blog for the Written Word


[1] Scholastic: A national magazine for high school students. 1935. See Andrei Ustinov, “Joseph Frank’s Works: A Bibliography,” Stanford Slavic Studies Vol. 4: Literature, Culture and Society in the Modern Age: In Honor of Joseph Frank. 1991-1992, in 2 parts, part 2, p. 11.
[2] “Spatial Form in Modern Literature: An Essay in Three Parts,” The Sewanee Review 53, nos. 1, 2, and 4 (January-March to October-December, 1945).
[3] Joseph Frank, Responses to Modernity: Essays in the Politics of Culture (Fordham University Press: NY, 2012).
[4] Joseph Frank, “Thomas Mann: The Artist as Individual,” The Washington Square College Review 1.7 (May 1937):5-6, 22-23. Frank, a freshman, was on the editorial board of the journal.
[5] A version is reprinted as “Eliade, Cioran, and Ionesco: The Treason of the Intellectuals” in Frank’s, Responses to Modernity.
[6] As Joseph Frank, “T. S. Eliot’s To Criticize The Critic,” Commentary 42. 3 (Sep 1, 1966): 87.
[7] As Frank noted during an interview that Steven Zipperstein and I conducted with him in the spring 2010, it was his NYU professor of English, Samuel Sillen, then also the book review editor for New Masses, who recruited him for the journal’s book-review section. Sillen (1911-73) later became the editor of its successor journal Masses and Mainstream (1948-63) but left the post after Khrushchev’s Secret Speech in 1956. On him see Allen M. Wald, The Literary Left of the Cold War (University of North Caroline Press: Chapel Hill, 2012):61ff and elsewhere.
[8] “An Economic Basis for Liberal Values,” The Southern Review 7, no. 1-2 (Winter 1941-42):21-39. The essay offers an extensive discussion of Marxism: An Autopsy (Houghton Mifflin: NY, 1939) by Henry Bumford Parkes, and Anglo-American historian and one of Frank’s professors and mentors while he was an undergraduate at NYU in 1937-38.  Reviewed favorably in Time by an anonymous reviewer (Vol. 34.17[10/23/1939]:82), the book produced barely a ripple elsewhere, and Frank’s essay seems to be the only serious discussion of Parkes’ thesis. The essay refers to the outbreak of the Soviet-Finnish War of 1939-1940 but does note mention the German invasion of the USSR on June 22, 1941, which suggests it had been finished and typeset in the interim.
[9] Then edited by Allen Tate.
[10] “The Birth of ‘Russian Socialism’,” in Joseph Frank, Through the Russian Prism, (Princeton University Press: Princeton, N. J., 1990): 223.
[11] Joseph Frank, “Paris Letter,” The Hudson Review 5, no. 4 (Winter 1953):582-592. Already in college Frank was “really passionate about Dostoevsky,” as his NYU professor Sidney Hook remarked to him after a class discussion (Interview with Stephen Zipperstein and Gregory Freidin, Stanford, 2010). In private conversations, he often suggested that it was via Camus and French Existentialism that he arrived at his study of Dostoevsky. Existentialism and Dostoevsky was the subject of his Gauss Lecture at Princeton in 1955, and the association is in plain sight in his doctoral dissertation, “Dostoevsky and Russian Nihilism: A Context for Notes from The Underground” (University of Chicago. Committee on Social Thought. 1960).
Posted by Grisha Freidin at 5:29 AM No comments: