Be Aware of the Quiet Days of August...

These are the quietest days of August. Even close friends do not respond to emails. What a perfect time for a coup d'état, as in 1991, or a quick trial and execution of one's political opponents, as in 1936, or, if you think that bad things happen only in Russia, diving headlong into a "European War," as in 1914.

Once, reflecting on exile and middle age, my friend and fellow-émigré, Joseph B., came up with an image for history: Clio as a serial killer on a rampage, hunting people down from the blue yonder with its high-power rifle. Mayakovsky saw his "pen an equal to a bayonet," so why not replace Clio's stylus with a sniper rifle? Vermeer, at the dawn of the age of celebrity, thought the trumpet of fame made more sense than Clio's iconic quill for recording history (his "Artist in His Studio"). We, children of the twentieth century, can just as easily take away her trumpet and place in her hand a rifle with a scope instead (the picture below is of Roza Shanina of the WWII fame). The itinerancy of exile - mused my friend then, as he was trying to make virtue out of necessity - was an efficient way of ducking Clio's fire. I imagined a bird's eye view of the two of us on a map scurrying for cover... He himself just lived long enough to see the age of static borders go the way of the steam engines and communism. What would he have said seeing death raining from the sky over lower Manhatten on 9/11? He lived in plain view of the World Trade Center.

By this poetic calculus, August should be treated as a month when the Muse of History is at its stealthiest. So, as you lounge by the pool, imaginary or real, with a cold tall drink in hand, mental or otherwise, nodding off over a new novel etched on your iPad or Kindle, watch out for Clio - and take cover! As in August 1991, 1936 or 1914, nobody knows where she will strike next - or when. 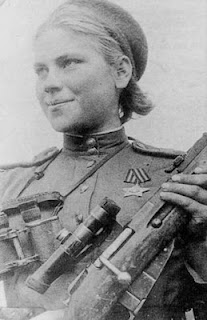 Posted by Grisha Freidin at 5:55 PM No comments: