One of the most talented, masterful and remarkable Russian cinematographers, Alexei Oktyabrinovich Balabanov, died suddenly on May 18, 2013, at the age of fifty five, in his family residence outside St. Petersburg. 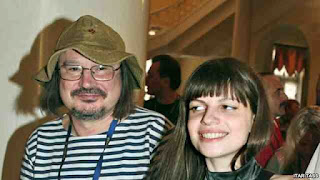 Russian cinema of the last quarter century, indeed contemporary Russian culture, is unthinkable without his "Brother" (Брат)  a gangster thriller about the early years of post-communist Russia that became folklore as soon as it was released in 1997; or his film "War" (Война) with its chilling stereoscopic (Western and Russian) view of the Chechen conflict (2002); or his blood-curdling, Gothic vision of Putin's Russia, "Cargo 200" (Груз 200). His sixteenth, and last, film, the mystical "I Want It, Too" (Я тоже хочу), came out in 2012.


For years now, I have been collecting notes for a long essay on Balabanov's cinematography and its deep roots in Russian intelligentsia mythology, including Russian nationalism, and contemporary popular culture, Russian and Western. A rock musician in his youth, he has been an unrivaled master of the sound track. The soundtrack for "Brother" I and II is the best anthology of contemporary Russian rock, which should be a thrilling discovery for those not aware of this period music. Ditto his "War." It opens with a Jihadist rock song in Chechen-accented Russian, cycles through the best of Splin, Bi-2 and others, and culminates with Butusov's piercing "My Star" (Моя звезда). The website for Balabanov's soundtracks is here.

Osip Mandelstam once called Baudelaire a martyr of modernism "in the true Christina sense of the word." It is in this sense, too, that Alexei Balabanov was a cinematic martyr of Russia's contemporary cinematography, so much did he identify with Russia's pain and her fragile beauty. I may yet write my long piece on Balabanov's cinema, but in the meantime. as a tribute to him, I am reposting my short essay on "Cargo 200." The piece appeared in "Film Watch," the magazine of the Telluride Film Festival where "Cargo 200" had its American premiere in August 2007. Click here to ro read the publication or simply read the text below.

On the surface, Aleksei Balabanov's Cargo 200 is a noir thriller about a psychopathic police captain in a provincial Russian city, one of those industrial hellholes that pockmarked the face of the U.S.S.R. The month is August, the year the Orwellian 1984. It was then that the angel of history despaired of the Soviet Union and made way for Mikhail Gorbachev. Historically authentic, Balabanov’s packs his Cargo 200  with such a strong allegorical charge that the result is a double exposure of Russia then and now, perhaps, forever. The film has polarized the opinion and set the whole of Russia talking—a sign of the rebirth of Russian film and engagé art. 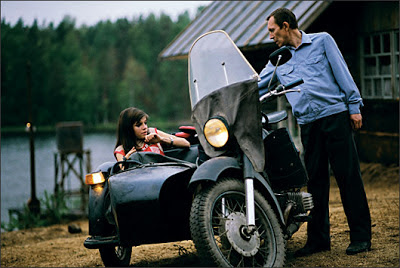 In 1984, Balabanov was 25, college behind him, and serving as a paratrooper in Afghanistan five years after the Soviet invasion. The USSR itself was 67 and stagnating. Keep this in mind as Cargo takes you to the Captain Zhurov’s fly-infested apartment; think also about the corpse of Vladimir Lenin, embalmed and still open for display outside the Kremlin, a ghoulish symbol of the country’s historical freight.

Balabanov heaves it out of storage. We are treated to close-ups of recycled pickle jars and vodka bottles, armored apartment doors, dilapidated buildings, classic Russian and Soviet kitsch, by now vintage Soviet jalopies, and Soviet TV footage that will set your teeth on edge. All objects are lit with bare bulbs, flashlights, hurricane lamps, primitive disco strobes and, for the most part, the kind of diffuse gray northern daylight that one imagines illuminates the better parts of hell. As always, Balabanov provides a lovingly selected period soundtrack with lyrics that create another layer of meaning. The illusion of authenticity he achieves is powerful, and those who lived under the old U.S.S.R. may break into a cold sweat realizing how little has changed. Cargo was shot on location, not far from St. Petersburg (Leninsk is the actual steel town Cherepovets). Apparently, all Balabanov’s crew needed for time travel was a set of wheels and a tank of gas. Pity Sasha Baron Cohen, who had to travel to Romania to get to his "Kazakhstan.”

Not having to go far, Balabanov digs deep, raising questions both about recent history as well as Russia’s much older romance with alcohol, corruption, xenophobia, and a rigid authoritarian state known for using extreme violence against its own people. Lest we forget, Balabanov has captain Zhurov head the Dzerzhinsky district of the Leninsk police department, the point amplified by a huge bust of Felix Dzerzhinsky, the founder of Cheka (now FSB),  next to Zhurov’s desk.

As in fairy tales, the film's three female figures stand for the three faces of Russia. The 18-year-old Angelika embodies Russia’s present, a spawn of the stagnant Soviet Union. Zhurov’s old mother is a caricature of Soviet citizenry, their minds shot by alcohol and propaganda. She is permanently glued to her TV and a glass jar full of hooch. And Antonina, wife of the underground distiller Aleksei, is a traditional good Russian woman, who is helpless to change anything (she fails to prevent the rape of Angelika) but is loyal and effective in her revenge. 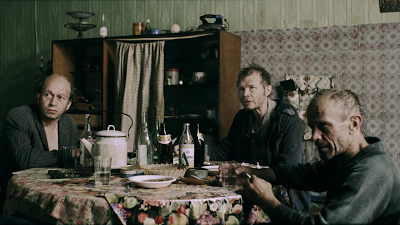 For the main male characters, Balabanov uses his favorite “brothers” device, arranging them in three sets. The “fathers” are the 50something colonel from Leninsk and his Leningrad sibling Artem, a professor of Scientific Atheism. Both worry about the future and are corrupt. Their “sons” are more despicable. Slava—that's Russian for "glory"—is a good-for-nothing hedonist. The shady operator Valery ("healthy" and" strong”) wears a red T-shirt with huge letters USSR on it and is romancing the colonel’s daughter to avoid the draft. As in the old Soviet joke about Pravda and Izvestia, which contrary to their titles contained neither truth nor news, the “sons” have no claim to either glory or strength, or health. Valery turns out to be a hopeless drunk and coward: he abandons Angelika to her abductor and flees from the area reluctant to get entangled with the police. As the film ends, he and Slava strike up a friendship of convenience, and we see them in a fading shot poised to spin out deals and become tycoons in today’s Russia. The film’s only other young man of their generation is Angelika’s long-awaited boyfriend, heroic Sergeant Major Gorbunov. He arrives in a sealed coffin, the film’s actual cargo 200. 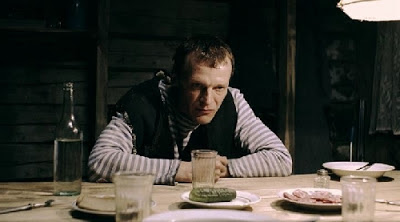 At the core of the tale are Aleksei (the director’s namesake) and captain Zhurov ("glum") who belong to neither generation and are, in a way, outside of time. They formed a bond, based on some secret, while Aleksei serving a ten-year term for manslaughter. The bond remains so strong that when asked by Zhurov, Aleksei accepts a death sentence for the murder committed by Zhurov. What their secret was is never revealed, but the film as a whole implies that, whoever different , Alexey and Zurov are invisibly joined at the hip like Siamese twins. 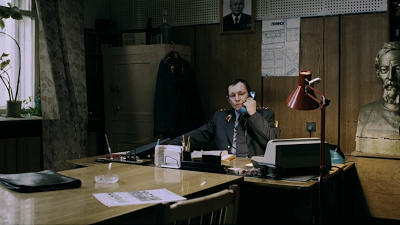 They are eternal Russian types, locked in the eternal Russian sadomasochistic drama. Alexei may indulge in a drunken Dostoevskian “conversation across eternity” with the professor of Scientific Atheism, wax eloquent about God and spin visions of utopian socialism. But he thinks nothing of forcing himself on Angelika the moment she walks in and would have, had he not conked out in a drunken stupor. Antonina hides Angelika in the peasant bathhouse where Aleksei keeps his illegal still but Zhurov picks up where the other left off. He finds Angelika there, forces her onto all fours and sodomizes her … with an empty vodka bottle. Soviet times, Balabanov is implicitly quoting from Dostoevsky, are the “eternity that is nothing but a peasant bath house with cockroaches in every corner.”

The rape scene is hard to take. But if you don’t look away, you notice a shadow of pleasure flit across Angelica's face—a form of consent between the victim and the victimizer. Balabanov links Angelica’s violation to Russia’s romance with alcohol. If Angelika-Russia is the enabler, then the police officer, who instead of protecting, gruesomely violates an innocent, rises as an embodiment of the brutal Russian and Soviet state for which vodka—before they struck oil—was the biggest source of revenue and civil quiescence.

In the morning, Zhurov handcuffs Angelica to his motorcycle. Their ride through the industrial outskirts of Leninsk is perhaps the most haunting long shot of the entire film, an inversion of the motorcycle glamour. Zhurov is taking his victim into the heart of—no, not darkness, but worse—Soviet industrial gray. Shooting in color, cinematographer Aleksandr Simonov proves himself the supreme connoisseur of every possible non-descript tint. Elevated tracks, intertwining pipes, smokestacks, girders, cables and cooling towers fly by, forming a cruel backdrop to Zhurov’s handsome stiff-backed motorcycle posture and Angelica’s face with smeared eyeliner and flowing mane.

Balabanov inverts the opening of Easy Rider and has a soundtrack to match Steppenwolf’s “Born to Be Wild.” As Zhurov rides, his prey handcuffed to the sidecar, the voice of Yuri Loza croons: " Through storms and rain, taking with me only my reveries, my childhood dreams, I shall float away on my little raft, … let my journey be hard … and perhaps I shall come to know the world in which I live … perhaps shall find a new bright and colorful world …”

Gregory Freidin, Professor of Slavic Languages and Literatures and Director of Interdisciplinary Studies in Humanities at Stanford University, is author of a critical biography of Osip Mandelstam, A Coat of Many Colors (UC Press, 1987) and forthcoming critical biography of a Russian Jewish writer Isaac Babel, A Jew On Horseback (Stanford University Press). He has been a commentator on Russian affairs for the Voice of America, BBC, PBS, and CBS.

Posted by Grisha Freidin at 1:48 AM