An Afternoon with Joseph Brodsky in San Francisco, December (?) 1988

I took this photo in San Francisco on a quiet December (?) afternoon 1988. An old friend and, by then, the latest Nobel Laureate, Brodsky came to San Francisco to give a speech at the Commonwealth Club. We met at Stanford Court Hotel and spent two, maybe three hours in intense conversation about our personal lives, reminiscences, literature, poetry, mutual friends, and of course, his new poetry. After a while, we went out for coffee, to refuel.

We sat at a small cafe outside and continued our conversation, now about his Nobel, the shock of the prize, and what it meant to get so much money in one swoop. Though both of us were by then well established in our new American lives, in our own minds we somehow still figured as "poor immigrants." I remember his answer, offered in his usual semi-dismissive sombre voice. "Money? Now it's just one more thing to be indifferent to." We reminsced about the times both of us were much less indifferent and swapped stories about the roads to enrichment neither of us had taken. One of his stories was about a super-rich girlfriend that he decided not to marry. What was my story — I now can't recall. There probably wasn't one.

On the way back to his room, I asked him to pose for me and my new Pentax camera, with my favoritewide-angle lens. The son of a photographer, he appreciated the camera, played with it a little and took a few shots (none came out well). He and I loved the quirky fog city, traversed it on foot on many occasions, and had a warm spot for its jerky cable car, especially for the fact that it was totally legit to ride on its footboard. An unquestioned taboo in Russia, it gave us a frisson to avail ourselves of a harmless San Franciscan libertinism. I was able to take this shot just as a cable car was crossing behind him.


Back in his room, he pulled out a few pages of typescript with his new poetry. It was an event for me each time I could to hear him recite his new verse — it felt like cold water touching a parched throat. It also felt like hearing my own voice but coming from the depths that I myself could never plumb. What were the poems? I don't remember now but I may still have these unautographed sheets somewhere.

By the time he finished, we realized that he was half an hour late for the Commonwealth Club. I had a very vague idea what honor it was to speak before this august body and suggested he cancel the event so that we could spend the rest of the day together. After all, there was still North Beach and Seal Rock, and the great Dim Sum restaurant on Sansome Street... He knew better. We rushed out of the hotel. He jumped into a cab and sped off.

The audience at the Club was patient. Brodsky was only forty minutes late. The MC introduced him by saying that among the presidents, prime ministers, Cardinals, authors, and other notables who had ever spoken at the Club, he was the first one to keep the audience waiting for almost an hour. All laughed, uncomfortably, no doubt. In the end though, I am sure they were all happy he managed to show up. No doubt, the poet laureate made sure that they spent the next hour excited, charmed, and entertained.

This year Joseph would have turned 80. I miss him as much as a quarter century ago when I first learned of his death. I had recently mailed him a pair of Soviet Navy undershirts — they were all the rage among boys in our childhood — wishing him and his wife happy sailing together. He was touched and sent me a post-card with a poem, in English. The verse was addressed to me and invoked my book about our other favorite Joseph, Osip Mandelstam (A Coat of Many Colors). The very language of the poem alluded to an underlying motif in our friendship: the love of English we shared and our life-long dedication to the cause of making it our own. Our friendship, in fact, may have begun back in the 1960s in Moscow over a discussion of Auden’s poetry. He began reciting “Memory of W. B. Yeats” in his vatic baritone, and I finished it for him in my own Muscovite high-pitched voice.

Back in January 1996, I drafted a ditty in response but hesitated to let go of it, afraid of spooking the good fortune of having a poem dedicated to me. He died before I made up my mind. I cherish the postcard... 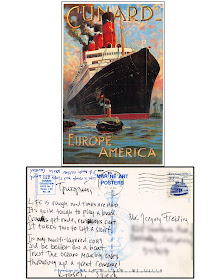